The Grave of Hitoyanosuke Watanabe 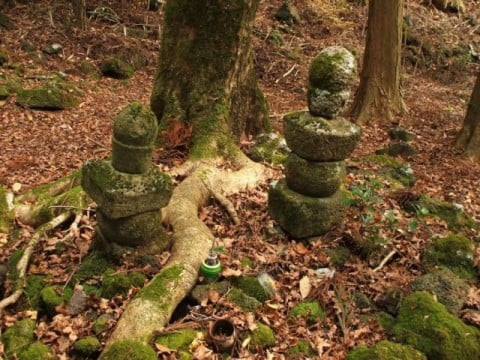 Watanabe Hitoyanosuke served Mr. Takeda and set up a base in Motosu on the border between Koshun and Ryogoku, and served as a guard for the border Motosu.
"Watanabe Hitoyanosuke's Tomb" is located about １ km south of Shiroyama in Motosu, a little higher on the eastern shore of Lake Motosu, and is surrounded by the ruins of Watanabe Prisoner's mansion and the traditional masonry. There are still sections left.
Several five-wheeled towers are enshrined in a section divided by masonry, and it is said to be the tomb of Watanabe Prisoner. Judging from the form of the Gorinto, it is estimated that it was built from the end of the Middle Ages to the middle of the early modern period.
The stone wall-shaped part made of lava stone continues to the north and east sides of the graveyard, and it is thought that the area that seems to be the site of the house is large, but how is that part related to the site of Mr. Watanabe's mansion? If so, it is difficult to clearly grasp the boundary of how far the range extends. It is thought that it will not be clarified without waiting for academic research such as archaeological excavation.

From Kawaguchiko Station on the Fujikyuko Line, take the Narusawa / Lake Shoji / Motosu Lake Line for 50 minutes and get off at the terminal "Lake Motosu Tourist Information Center", or take the local bus for Shin-Fuji Station / Lake Motosu / Shimo Onsenkyo for 47 minutes. Get off at Lake Motosu and walk for 3 minutes.