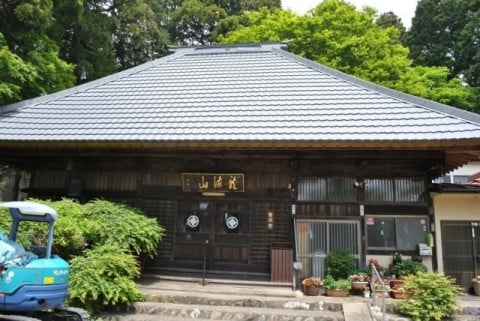 It is a temple of the Soto sect and is the last temple of Ryugein located in Kamisone-cho, Kofu city. The temple name, Ryugadake, is related to Ryugadake, and it is said that Goganji was built on the shore of the lake.
According to folklore, it is said that during the Middle Ages and the Warring States period, Goganji Temple was built to protect the border of Koshun and used as a military commander's station, but it was written in １８６８. According to the "Shaki / Temple", the foundation was founded by Kazuhisa Yume, who opened the mountain in the ７th year of Keicho (１６０２). In "Kokushi Kai," the opening of the main temple is referred to as Watanabe Prison.
It used to be located on the shore of Lake Motosu, but since the temple area is lower than the private houses, the residents consulted during the Anei era (1772-1788) and relocated to a site higher than the shore.

From Kawaguchiko Station, take the Narusawa / Lake Shoji / Lake Motosu tour bus for 47 minutes, get off at the "Lake Motosu" bus stop, and walk for 3 minutes.