Sanjyuban-shindou[Sanjuban Shindou]
This temple, located in the precincts of Myohoji Temple, is a so-called eclectic building that was handed by Izu resident Katsuro Mannosuke Namiyoshi in Meiji 23 (1890). It is a valuable remains that should be regarded as a masterpiece of Japanese architecture in the Meiji era.
In addition, the 9.40m square worship hall of the Tented Roof has the facilities of a revolving stage and was used as a stage for local plays until recent years. 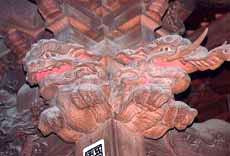 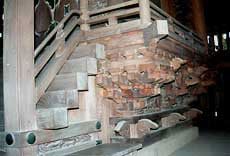 From Kawaguchiko Station, take the Retro Bus Saiko / Aokigahara Line and get off at "Kawaguchiko Muse Museum Entrance". 1 minute walk towards Mt. Fuji.