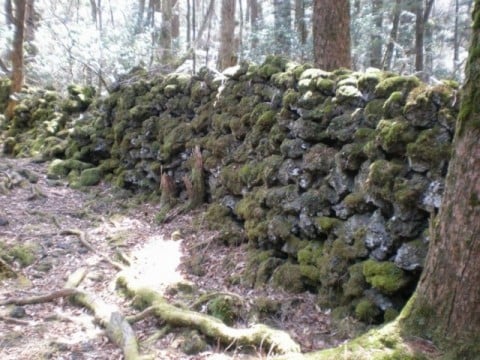 Some lava masonry remains at the foot of the mountain from the entrance of the former Kamikuishiki Junior High School to the north side of Shiroyama in the forest around Shiroyama in Motosu. Some parts were destroyed by the road passing through the forest, but it is probable that the middle road went back and forth between them in the past.
These stone bases are thought to have been built as a facility for the defense of Motosu's Shiroyama during the Takeda era, and incorporate the main trunk line middleway traffic between Koshun, which is thought to have passed through this place during the Warring States period. It is probable that it functioned as a military barrier in close relation to Motosu's Shiroyama and Nakamichi traffic. 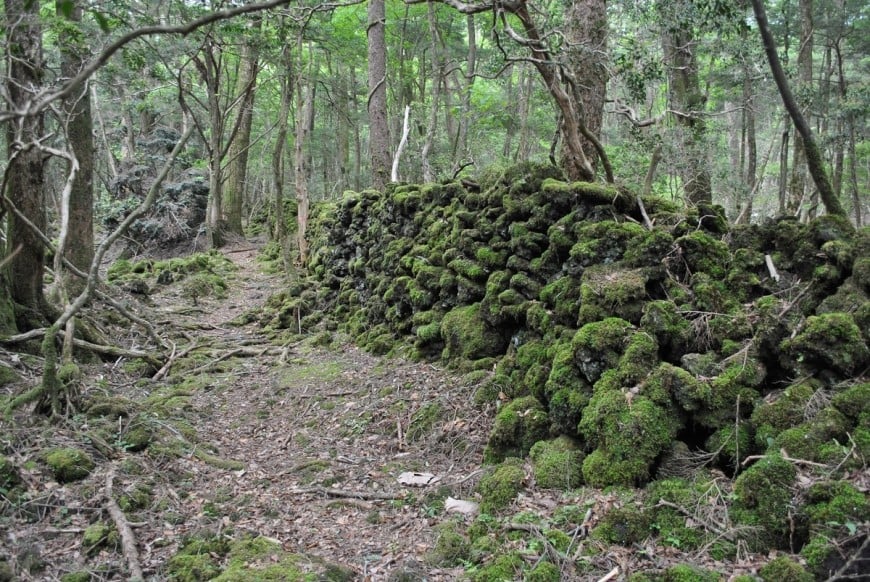 Motosu also has a stone base.The stone base is located on the east side of the village, which was discovered around Showa 62, on the side of Mt. Fuji. It is in the south side of Jukai across the road from the entrance on the national highway side of the former Kamikuishiki Junior High School. It is a long masonry with a length of 2 km, and is a stone base made by stacking untouched lava to a width of about 1 m and a height of about 2 m.
Regarding the character of this stone wall, ① Ichi with a stone wall is close to Shiroyama in Motosu, ② the stone wall line bends like a crank in one place and is similar to the stone wall line of the castle, ③ the Mt. Fuji side slopes steeply. Based on the fact that the Motosu village side has a gentle slope, the "border defense theory," "beast repellent theory," and "lava stop theory" have been issued and are controversial, but they have not yet been settled.