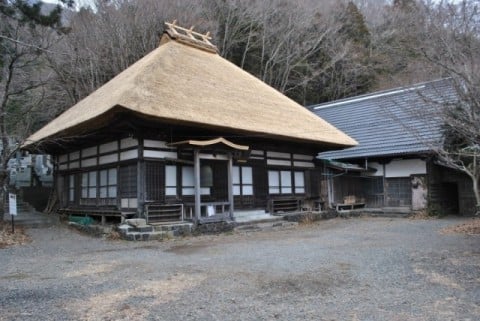 Ryusenji is a temple of the Soto sect in Imura, located on the north shore of Lake Shoji, and is adjacent to Shoji Suwa Shrine.
Ryusenji Temple was destroyed by fire during the Horeki era (1751-1763) during the Edo period, and it is possible that the current main hall was built during the Meiwa era (1764-1771). The architectural style seems to be from the middle of the Edo period to the beginning of the late Edo period.
It is clarified that the building age of the back of the warehouse is in Kansei 11 (1799) by the inscription on the building tag.It seems that the back of the warehouse was rebuilt after the main hall was rebuilt.
It is the oldest temple building in Fujikawaguchiko Town, and only the main hall retains the thatched roof structure. The roof of the back of the warehouse was changed to a tiled roof in posterity.
The main hall is the only case in the town where the structure of the thatched roof is left, but the deterioration over time has progressed and the decayed parts have become conspicuous. In heisei 27 (2015), the thatched roof of the main hall was re-roofed at Ryusenji Temple, and measures were taken to retain the form from the beginning of construction and pass it on to future generations.
"Ryusenji Main Hall and Kuri" is a valuable building that conveys the architectural style of the latter half of the 18th century during the Edo period. In addition, the thatched roof of the adjacent Suwa Shrine is also a rare building that retains the thatched-roof shape, forming the landscape of the village of Imura, which once had a long history as a transportation hub along the middle road. Plays an important role.

From Kawaguchiko Station on the Fujikyuko Line, take the Narusawa / Lake Shoji / Lake Motosu tour bus for 37 minutes, or take the local bus bound for Shin-Fuji Station / Lake Motosu / Shimo Onsenkyo for 35 minutes, and get off at "Seijin". 3 minutes on foot.